The GUSTAVIA YACHT CLUB is pleased to invite members to a repeat lecture by Spanish Solo Explorer Álvaro de Marichalar.

An evening of Extreme Adventure: Solo Voyager at the Clubhouse

The Clubhouse will be privatised from 6pm till 8pm Saturday the 6th of March for this event.

Attendance for 25 people on deck 2 will be on a first come served basis and the tickets cost will 20 euro including the usual complimentary bar and nibbles.

The sailor will be talking about his recent Solo Caribbean SeaTour, a World Record he accomplished by Solo navigating aboard a tiny 11 ft vessel, to commemorate the 5th Centennial of the European Discovery of Florida and the Pacific Ocean, by Spanish Adventurers Juan Ponce de León and Vasco Núñez de Balboa back in 1513 (Expedition Map attached).

Álvaro de Marichalar will also talk about other accomplished expeditions, such as the one from Rome to NYC (transatlantic);

from Hong Kong to Tokyo,

from Moscow to Saint Petersburg;

from Paris to London;

or even from Barcelona to Odessa, always solo crossing the oceans aboard his wee water scooter.

Álvaro's Lectures are based on his experience at sea: He lectures about the will to fight against all odds; the ability to conquer fear. About his solo voyage from Southern China to Tokyo; from Spain to Ukraine; from Italy to the USA Transatlantic among other expeditions.

Alvaro talks about ocean preservation and the spirit of friendship; about sports and a healthy life.

Álvaro has a captivating lecture directed towards Students, Businessmen, Managers, and other Entrepreneurs drawing parallels between their business world and his experiences.

Álvaro is an inspiring story teller who can captivate any audience with his stories of successful management and execution of extraordinary feats. A true avatar, who knows what his next adventures will be and how they will further inspire us. 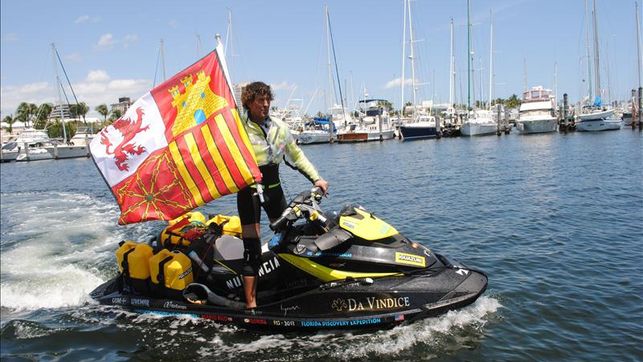 In 1984 he founded TeleSat, one of the first companies to supply systems for satellite television reception in Spain and France. Presently he manages his own mobile-phone sales and recycling company in Spain and other European countries.

His passion is sailing; an activity he combines with his business commitments.

Since 1982 he has carried out 39 maritime expeditions, winning twelve World navigation Records.

With his sea crossing expeditions he raises humanitarian aid for NGO, such as Mensajeros de la Paz or Tierra de Hombres.

He also writes books, produces documentaries (for National Geographic Channel, among other TV channels) and lectures at conferences around the world:http://www.thinkingheads.com/conferenciantes/alvar...

Medal from the City of San Petersburg.

This will be a great event not to be missed.